With Euro 6 emissions Australia, average CO2 emissions need to be below 130g/km across a car company's entire range. There are also tighter restrictions on a wide range of pollutants including carbon monoxide, hydrocarbons, NOx and particulates. The latest step is Euro 6, became mandatory in September 2015.

Australia can have far less auto emissions and cleaner air, all without any significant cost to Australia or Australians.

In fact, normal Australians will save money with Euro 6 emissions compliant cars in Australia

Australia can adopt the European Union Euro 6 auto emission standards with not much more than the stroke of a pen.

The benefits are huge, with virtually no cost and no obvious opponents…

What is Euro 6 Emissions for Australia? Euro 6 Emissions for Australia are to reduce air pollution and follow the European Commission first introduced Euro 1 in 1993.

Since then legislation has progressed in a number of steps, resulting in the development of newer and cleaner engine technologies.

The latest step is Euro 6, became mandatory in September 2015.

With it, average CO2 emissions need to be below 130g/km across a car company's entire range.

There are also tighter restrictions on a wide range of pollutants including carbon monoxide, hydrocarbons, NOx and particulates.

Euro 6 more than halves the amount of nitrogen oxides that a diesel engine can emit, with a cap of 80mg/km.

Euro 6 is focusing on NOx because it is one of the most harmful greenhouse gases.

It can last up to 150 years, which is significantly longer than other greenhouse gases.

The overall aim of Euro 6 is to reduce auto emissions, thereby limiting the impact on the environment and public health.

The graph below shows the levels of improvement leading to Euro 6: 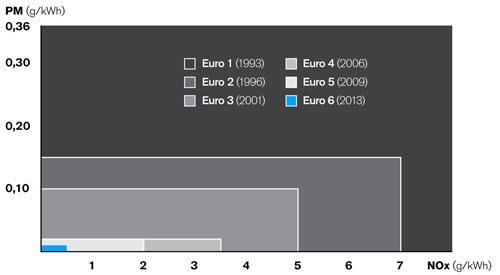 What are the Car Manufacturers Doing to Meet Euro 6?

Ford, for example, will expand the use of its EcoBoost powertrain across more vehicles.

A huge amount of development work has been done by car manufacturers to develop cleaner engine technologies.

As a result, average emissions for carbon dioxide across current manufacturers’ ranges sits at approximately 130g/km, and the aim is to reduce that to 95g/km by 2020.

Considering that the average emissions in 2000 were 180g/km, this is a huge improvement.

Diesel is a bigger culprit than petrol when it comes to nitrogen oxides (NOx) and particulates (PM).

Most manufacturers are turning to after-treatment systems such as the Lean NOx trap or Selective Catalytic Reduction (SCR), which works with a reduction agent.

This will increase the cost of purchasing and running diesels only and may result in fewer diesel car sales.

But is that a bad thing given that diesel exhaust is a known carcinogen?

How Will All of this Benefit Me?

The Euro 6 emissions for Australia should make your car both cleaner and cheaper to operate, with lower fuel consumption.

Let’s also not forget the associated health risks with the rise in these harmful gases, including the carcinogenic diesel emissions.

The obvious benefits of a Euro 6 car -- apart from helping the environment -- is that you will be buying the very latest in engine technology.

In most cases this means better fuel economy and lower CO2 emissions, resulting in fewer trips to the petrol station and cleaner air.

No Harm to Australian Car Makers

In the past, if the government passed stringent emission guidelines, like Euro 6, it would have hurt the Australian car industry, as a result of the cost of development.

Now that the manufacturing of cars in Australia is about to end, there is no costly development for our industrial sector.

Australia, as a whole, benefits from Euro 6 emissions for Australia.

These are all fuels in which Australia is self-sufficient.

This means greater fuel supply security and even more improvements in the balance of trade.

Australia should take advantage of the development work done by the overseas car manufacturers in achieving Euro 6 emissions for Australia.

These cars can easily be imported into Australia in place of the ‘dirtier’ alternatives.

This is as close to a direct free kick as we may ever have in cleaning up our environment.

Come on Australia, take the kick!

Comments, questions or feedback?
Please Email us at: This email address is being protected from spambots. You need JavaScript enabled to view it.