In Australia, LPG goes by many names and this can sometimes be confusing.

LPG vs propane? Essentially, LPG and propane are the same thing. In addition to propane, LPG can also be butane, isobutane and mixtures of these gases.

So, here is a quick tongue-in-cheek summary of all of the various terms used to describe our favourite product:

Is Propane the Same as LPG – LP Gas – BBQ Gas

LPG – Liquefied Petroleum Gas – is flammable hydrocarbon gas liquefied through pressurisation. Propane is the same as LPG but LPG can include other gases, as well. In addition to propane, LPG can be butane, isobutane or any of a number of different gases and is also referred to as natural gas liquids – NGL.

Can I Use LPG Instead of Propane

You can use LPG instead of propane, as LPG is typically propane, just by another name. In some countries, LPG can be a LPG gas mixture of propane and butane but in most cases you wouldn’t be able to tell the difference. 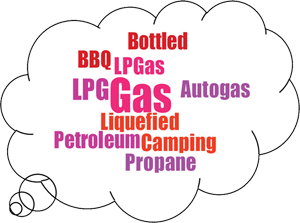 This is probably the most common term used in Australia.

However, Australians love to err on the side of being overly descriptive.

LPG is the acronym for Liquefied Petroleum Gas.

It is commonly used in Australia and probably the most common term used worldwide.

In some non-English speaking countries they call it GPL.

No, they are not dyslexic!  They just have different language syntax.

This is for people who can’t decide between acronyms and words.

While technically correct, it just isn’t as popular as the erroneous “LPG Gas”.

Being grammatically challenged is just way more fun than being indecisive!

It is LPG gas for BBQ. What gas is in BBQ gas bottles is LPG, including either propane, butane or mixtures of these fuel gases. Both propane and butane are sold as gas for BBQ (barbecues) and both work equally well as the type of fuel, no matter which gas BBQ grill. BBQ gas is the same as LPG and is also referred to as “Patio Gas”.

BBQ Gas is another very descriptive favourite in Australia.
Probably painfully obvious but we were sure you would want us to be as descriptive as possible on the origin of the term.

2. LPG gas for a BBQ gas bottle is flammable hydrocarbon gas that is liquefied through pressurisation.

4. The gases that fall under the “BBQ gas” label include either propane or butane, as well as mixtures of these two types for gas for BBQ gas bottles.

5. Gas for a BBQ (gas for barbecues) is compressed into liquid at relatively low pressures.

7. Gas for a BBQ (gas for barbecues) is stored, as a liquid, in small BBQ gas bottles.

8. LPG gas for a BBQ (gas for barbecues) is also called BBQ gas or patio gas. LPG is the acronym for Liquefied Petroleum Gas.

Let’s see… “auto” combined with “gas” as one word?

Autogas shockingly refers to LPG that is used in LPG powered autos.

I keep telling you that we Australians are into being descriptive.

We even have tourist sites known as the “Big Banana” and the “Big Prawn”, as well as about 150 other Australian Big Things.

Assuming you don’t already know, there are no bonus points for guessing what these are!

Do we really need to explain?  Think the type of gas for BBQ.

We are a fickle bunch.

Sometimes we choose to be descriptive regarding the container instead of the use, so we call it Bottled Gas.

However, we are a bit indecisive as sometimes we also use “bottle gas” and “bottles gas”.

Get with it people and make up your mind!

When it comes to LPG vs propane, the Yanks are very fond of propane.

As you may have surmised, Australians tend to not use technical terms when more descriptive terms are available, so Propane isn’t a very common term in Australia.

This is a bit schizophrenic of us, as LPG in Australia is actually about 98% Propane, so it is very accurately descriptive.

This is for decisive people who hate acronyms and prefer the full and precise term for the product.

Very popular with engineer types.  A slight variation on this is “Liquid Petroleum Gas”.

As you may have guessed, this term is not very popular at all in Australia.

Why would you expect an Australian to say or write the long version of a term when we don’t even bother pronouncing ‘R’s at the end of words?

My favourite example of this is a place called the “Supa Centa”, which is phonetically correct in Australian English.

It doesn’t seem to bother us that neither one is actually a real word?

But What is LPG?

LPG is used for heating our homes & hot water, cooking our food, powering our BBQs & fuel our cars.

It also powers many business and agricultural processes.

Explaining LPG vs Propane in Australia

The term LPG actually encompasses more than one variety of gaseous fuel.  In Australia, LPG is typically Propane.

There are a number of hydrocarbon gases that fall into the classification of “LPG”.

Their common distinguishing characteristic is that they can be compressed into liquid at relatively low pressures.

LPG is stored under pressure, as a liquid, in a gas bottle.

It turns back into gas vapour when you release some of the pressure in the gas bottle by turning on your appliance.

What is LPG made of: LPG Composition

The gases that fall under the “LPG” label, including Propane, Butane and Isobutane, as well as mixtures of these gases.

The two most common are Propane and Butane.

In Australia, LPG is Propane not LPG vs propane. Propane is the gas that is supplied to virtually all homes and most businesses that purchase LPG in Australia.

LPG is supplied in gas bottles that are either exchanged or refilled on site by LPG tankers.

However, no worries, as it’s all the same gas.

Butane is also considered to be LPG.

Butane is supplied to businesses that require Butane, as opposed to Propane.

Butane has some specific applications where it has advantages over Propane.

The chemical formula for Butane is C4H10.

Autogas that is sold at service stations can be Propane or a Propane/Butane mix.

Not only is running an LPG car economical, but Autogas is also cleaner burning fuel than petrol, so engine life is actually extended and greenhouse gas emissions reduced.

Where does LPG come from?

LPG is produced during natural gas processing and petroleum refining.

Propane does not occur naturally in isolation.

Once refined, LPG is stored as a liquid under pressure in gas bottles or tanks.

At the point of use it once again becomes a gas.

LPG processing involves separation and collection of the gas from its petroleum base.

LPG is isolated from the petrochemical mixtures by separation from natural gas or by the refining of crude oil.

The gas/oil mixture is piped out of the well and into a gas trap, which separates the stream into crude oil and “wet” gas, which contains LPG and natural gas.

The heavier crude oil sinks to the bottom of the trap and is then pumped into an oil storage tank for refining.

Crude oil undergoes a variety of refining processes, including catalytic cracking, crude distillation, and others.

One of the refined products is LPG.

The “wet” gas, off the top of the gas trap, is processed to separate the gasoline (petrol) from the natural gas and LPG.

The natural gas, which is mostly methane, is piped to towns and cities for distribution by gas utility companies.

The petrol is shipped to service stations.

The LPG also enters the distribution network, where it eventually finds its way to end users, including Home LPG and Commercial LPG users all around Australia and the world.