Gas for a BBQ:  What Type of Gas for BBQ - BBQ Gas Bottle - Barbecue Gas Bottle

A barbecue gas bottle (BBQ gas bottle) is the same as an LPG gas bottles and is also referred to as "patio gas bottle".

What Gas for BBQ

Gas for BBQ is LPG - Liquefied Petroleum Gas - meaning either propane, butane or a mixture of the two. Gas for BBQ can also be natural gas, if hooked up to the home's natural gas supply.

A BBQ gas bottle contains propane gas. It is a great choice for year round cooking, as propane works at a lower temperature than butane - another common gas for a BBQ. Available in 9kg and 4kg BBQ gas bottle sizes, there's gas for every size barbecue.

Assuming summer gas BBQ weather, which of these LPG gases for a BBQ would make virtually no difference in your gas grilling experience.  So, which gas for a BBQ gas bottle is a moot point.

LPG gas for a BBQ fuel (gas for barbecues) is liquefied through pressurisation and distributed in small portable gas bottles or disposable cartridges.

Gas for a BBQ gas bottle (patio gas bottle) is also used for various outdoor gas appliances including outdoor heaters, smokers, fire pits and pizza ovens, as well as a gas for grilling.

Patio gas can be either propane or butane and supplied in a patio gas bottle or patio gas cylinders. Both propane and butane are sold as patio gas for BBQ (gas for a BBQ) and both work equally well, although propane is preferred in cold weather.

In addition to using patio gas for BBQ, it can also be used in a gas patio heater.

Regarding patio gas vs propane, they are essentially the same thing.

Most BBQs – barbecues – can use either propane, butane or a propane-butane mix. In countries where propane and butane use different gas regulators, the gas regulator determines what gas to use for BBQ. Both gases will work equally well unless the temperature drops below freezing, when butane stops vaporising.

In cold weather situations, propane is the gas of choice, as a butane bottle stops providing usable gas below freezing.

1. LPG is the acronym for Liquefied Petroleum Gas, which is gas for barbecues.

2. LPG gas for barbecues fuel is flammable hydrocarbon gas that is liquefied through pressurisation.

4. The gases that fall under the “BBQ gas” label include either propane or butane, as well as mixtures of these two types for fuel gas for BBQ grilling.

5. Gas for a BBQ (gas for a barbecue) is compressed into liquid at relatively low pressures.

7. Gas for a BBQ (gas for a barbecue) is stored, as a liquid, in small BBQ gas bottles.

8. Gas for a BBQ grill is the same as LPG

9. LPG gas for a BBQ (gas for barbecues) is also called BBQ gas or patio gas.

Note: Some numbers have been rounded

Which type of gas is in BBQ gas bottles varies in different countries. What is supplied can be propane, butane or propane-butane blends (gas for barbecues).

Type of gas for a BBQ (gas for barbecues) is just propane in Australia and the USA.

In NZ, gas for a BBQ is a propane-butane blend.

In the UK, you can purchase patio gas as either propane or butane gas for a BBQ.

You can use butane instead of propane as type of gas for a BBQ (gas for barbecues) as long as the ambient temperature is above freezing. If the temperature drops below freezing the butane will stop vaporising and you will have no usable gas.

Gas for a BBQ Goes by Other Names - What is Patio Gas?

BBQ gas goes by a number of names and this can sometimes be confusing.

In Australia, it is called BBQ gas or LPG gas.

It is also called Camping Gas.

In the USA they just refer to the vessel instead of the gas, so it is a “Propane Tank”.

When they use it, they also usually call it grilling, instead of barbecuing. 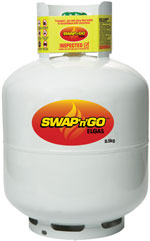 BBQ gas bottles vary in size depending on the country you are in.

For example, the most common BBQ gas bottles in Australia and the US are 9kg (20lbs).

There are also smaller bottles, like the 4kg BBQ gas bottles, that are popular with campers.

In the UK, 13kg and 5kg are the most common sizes of patio gas, in addition to a large choice of other gas bottle sizes.

What is BBQ Gas Used For? Gas for a BBQ (patio gas) is utilised in numerous different applications, including many that are far from barbecuing and the patio. The common factor is the need for a small and/or portable fuel source.

There are also some that are a bit more exotic, like outboard motors, lawn mowers, bird scaring canons, and more.

There are also LPG gas hot water systems for camping. These are fuelled by 9kg camping gas bottles. They are self-contained units that you just hang outside near a water source.

Where Does Gas for a BBQ Come From?

There are two types of gas for BBQ: propane and butane. Gas for a BBQ (patio gas) is produced during natural gas processing and oil refining. This BBQ gas can be used as is or separated into its three primary parts: propane, butane and isobutane.

Gas for a BBQ (LPG) comes from drilling oil and gas wells.

It is liquefied through pressurisation and stored in BBQ gas bottles.

How Does Gas for a BBQ Work?

Gas for a BBQ (patio gas) is stored under pressure, as liquid gas is in BBQ gas bottles. Almost all of the uses for BBQ gas involve the use of the gas vapour, not the liquefied gas.

But first it must go through a gas regulator.

What are BBQ Gas Regulators? The regulator screws directly into the gas bottle whilst the gas hose screws into the appliance.

The standard BBQ regulator type in Australia is a ‘POL’ regulator which has a male connector (reverse or left-handed thread) that fits into a ‘POL’ valve on the gas bottle.

Other countries use other valve and regulator types.

What is BBQ Gas Bottle Testing?

The gas bottles are subject to internal and external inspection for rust and any other damage.

Physical testing, including pressure tests, may be required depending on the type of gas bottle and the country where tested.

Only approved testing facilities are authorised to test and re-certify gas bottles, cylinders and tanks.

Renewable vs Climate Friendly Gas for a BBQ

Most people would think that a renewable fuel, like charcoal, is more eco-friendly than gas for a BBQ. However, when it comes to charcoal versus Gas for a BBQ (patio gas), the climate friendly choice is not what you may think.

Biofuels do not always result in a smaller carbon footprint than the fossil fuel alternatives.

The problem with charcoal is that it emits almost 3X the amount of CO2 that is produced when you use gas for a BBQ.

This is harmful because CO2 is a greenhouse gas that contributes to climate change.

To produce charcoal, you heat wood in a kiln.

However, the usable output of charcoal is only around 20-35% of the original input.

The remainder of the wood turns into gas and is emitted into the atmosphere.

In contrast, BBQ gas energy yields are greater than 90%.

The fact that you cannot simply turn a charcoal grill ON and OFF increases the problem.

Charcoal fires need to be started ahead of time and then take time to burn themselves out.

Gas for a BBQ (patio gas) is just a much more efficient fuel for cooking.

The following chart shows the comparison: Does a gas BBQ need coals?

No, a gas BBQ is fueled by the BBQ gas alone.

Final Thoughts on Which Gas for a BBQ

Which gas is in BBQ gas bottles is BBQ gas (patio gas) is a safe, versatile and portable energy source. It is also easy to use, transport and refill. But most of all, gas for a BBQ (patio gas) helps make outdoor activities more enjoyable.