*In our normal service area

Helium, as an inert noble gas. This means it is non-reactive and not flammable. Its molecular structure is what makes it so unreactive and non-flammable. Helium is one of the six noble gases, which are inert gases which have very low chemical reactivity. Helium is rare and there are now shortages of helium.

Helium is lighter than air and is frequently used to inflate balloons. As it is expensive, less expensive hydrogen is sometimes used as a substitute, but hydrogen is extremely flammable.

Most helium is sourced from raw natural gas and must be separated, during natural gas processing, as it would hinder the flammability of the methane. It is separated using a cryogenic gas separation process.

Helium is non-flammable. Unlike hydrogen, which is extremely flammable (the Hindenburg was filled with hydrogen), helium is non-toxic, colourless, tasteless, odourless and helium is totally non-flammable. In fact, helium can even be a fire retardant, as a helium atmosphere which has no oxygen cannot support combustion.

Is Inhaling Helium Dangerous? How Dangerous is Helium

Can you refill a helium tank? Disposable helium tanks, like Balloon Time, cannot be refilled. These helium tanks are designed to be lightweight, easy to use, disposable and recyclable, but NOT safely refillable.

Helium tank refill of a non-refillable lightweight disposable tank can be very dangerous.

Helium tank hire with your choice of 140 balloons, 300 balloons or 750 balloons capacity. We also offer free delivery in our normal service area for a super easy helium tank rental-hire.

Balloon gas or helium gas and balloons are used for helium balloon inflation. The number of balloons filled* is an approximation only, as it can be affected by temperature and fill technique.

Uses of Helium – What is Helium Used For?

Some notable uses of helium include helium used for filling of decorative gas balloons, helium is used to provide lift in Lighter-Than-Air ships – blimps and dirigibles – based on its extremely low density compared to air and helium used as a cooling agent in scientific devices such as the Large Hadron Collider, MRI scanners and NMR spectrometers, as well as being used as a carrier gas for gas chromatography.

Helium is not flammable and very inert. This lends itself to use as a protective atmosphere for a number of processes including welding and semiconductor production.

Deep sea divers make a mixture of 80% helium and 20% oxygen. This eliminates nitrogen, which normally makes up 80% of the air we breathe, reducing nitrogen narcosis and other adverse physiological effects.

Liquid helium is used to promote superconductivity in certain metals

Whether you can refill helium gas balloons, or not, depends on the method used to seal them.

If you knot the end of the helium gas and balloons, you probably can’t do a helium refill of your balloons.

If you used removable plugs then you can probably can do a helium refill of your balloons.

Do You Need to Get Helium for a Balloon Arch

Helium (Symbol: He) is a colourless, odourless and non-toxic gas known for being much lighter than air. Find helium vapour and liquid both have very low viscosity, which is why helium leaks out of an apparently sealed balloon. Helium is non-flammable.

Helium is the only element that remains liquid down to absolute zero (0°K) at 1 atm.

Helium is the second most abundant element found in the universe.

The different types of helium are based on purity and expressed in purity grades. The low purity Grade 4 is balloon gas grade. The higher purity grades are used in semiconductor manufacturing and scientific applications. Grades 4.x are industrial grade purity levels.

(Office Only — Not a Depot Site)

You just call and you get a full helium tank refill in exchange for your empty tank.

Then, back at our depot, we do a helium tank refill of the empty tanks.

The following is a timeline of the major events in the history of helium:

Helium comes from from natural gas processing. We make Helium from a process called fractional distillation, which uses very low temperature to separate the gases. You find helium is made as a by-product of natural gas but Helium sources are found only in certain locations on earth, most notably in the USA. You can find helium to be as much as 7%.

The helium is then produced by purifying it using activated charcoal.

Finally, the helium made is liquefied cryogenically so that it can be transported on an economical basis. 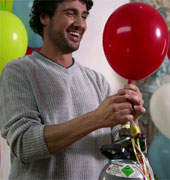 There is a well-known party trick where people suck gas out of helium balloons to talk funny. However, most people don’t know how dangerous inhaling helium is. Inhaling helium is dangerous. Helium is non-flammable.

Helium gas changes your voice when you inhale helium. Helium affects your voice timbre, because helium is much less dense than air. This is a result of sound travelling faster through helium than air, as well as helium favouring high pitched sounds.

When you speak, you rely on your vocal chords to make the sounds. The air passing through your larynx causes the vocal chords to vibrate. The mouth, lips and tongue then convert the sound into speech.

How Dangerous is Helium – Is Inhaling Helium Dangerous – Asphyxiation

Does Breathing Helium Hurt You – Symptoms of Hypoxia

The resulting Hypoxia is a condition that develops when the body is deprived of an adequate supply of oxygen. Generalised hypoxia can cause dizziness, disorientation, abnormal heart function, unconsciousness and even death.

Be Safe with Helium Gas Balloons

Don’t be a daffy duck! Here are some safety tips to keep you, your family and friends safe:

Releasing gas balloons may seems harmless except gas balloons do eventually come back down to earth and can cause environmental damage. Released gas balloons pose a danger to wildlife and especially marine wildlife.

Releasing gas balloons may also be illegal, depending on where you live. For example, in NSW it is against the law to release 20 or more gas balloons.

Elgas and the gas balloon industry are deeply concerned about the misuse of helium balloon gas. We want to ensure that customers, their family and friends are all educated to understand the dangers and how to safely enjoy helium gas balloons.

To help educate Australians, BOC, with the support of Elgas, has produced the following community service announcement. Voiced by iconic Australian actor Michael Caton, the video depicts a family setting up for a children’s party.

“We’ve all seen this at one time or another, some of us may even have done it ourselves, but inhaling balloon gas is very dangerous and can be fatal,’’ Mr Caton says in the announcement. “The helium in balloon gas acts as an asphyxiant and when you inhale it displaces the oxygen in your lungs. Balloon gas is safe in balloons and when you release it in a well-ventilated area and in a safe manner. So the next time you see some sucker about to inhale balloon gas or you think it is going to be a laugh, stop and be gas wise,’’ he says.

You will most likely see it on TV over the coming months. Many thanks to Michael Caton for once again agreeing to be our ‘voice talent’ on this, as well as our previous BBQ Safety community service announcement. Finally, kudos to our friends at BOC for creating the ‘Be Gas Wise’ safety campaign.

Do not inhale gas balloon helium.

Helium does not support life. Inhaling helium can lead to suffocation or even death.Cylinders must be stored below 55ºC, in a naturally ventilated areas constructed of non-combustible material with a firm level floor, away from areas of high traffic and emergency exits.

Read all instructions and warnings on the cylinder, cylinder tag, packaging and leaflets to ensure optimum results and your safety.

If users have further questions supplier can be contacted.

Ensure that safe handling procedures are followed at all times.

Store cylinders in an upright position and secure properly to prevent toppling.

Safety stands; braces, trolleys, straps and other purpose designed cylinder safety equipment can be purchased from many industry suppliers, as well as Elgas.

Regulators should not be attached to the cylinder during transport.

Cylinders must be secured during transport.

Always store and transport cylinders in a well-ventilated area away from obvious fire risks.

Do not bend and lift cylinders.

Use a trolley to move cylinders.

Helium inhalation is no laughing matter Gas balloons at parties are to be enjoyed but customers should be warned that an attempt to sound like a cartoon character can be fatal. When inhaled, gas balloon displaces air in the lungs in the way similar to water when a person drowns.

Inhaling gas balloon cuts off oxygen supply to the body. Without oxygen it only takes a few seconds before an individual can become dizzy or unconscious and can stop breathing.

Inhaling balloon gas under pressure straight from the cylinder is even more dangerous. Air sacs in the lungs are likely to rupture and death follows almost immediately, as victims literally drown in their own blood.

Elgas and the gas balloon industry are deeply concerned about the misuse of gas balloons.

Ensure that customers are advised to educate family and friends to understand the dangers.

Ensure that customers are also advised to always supervise children and teenagers.