Is Propane a Liquid or Gas? Liquid Propane vs Gas Propane

Propane is a gas at standard temperature and pressure, but liquefies under pressure for storage. Propane, used as a fuel, is a co-product of crude oil and natural gas processing. Propane is classified as one of the liquefied petroleum gases - LPG gas.

Both gas and liquid propane have applications but are not interchangeable. Propane liquid is LPG - Liquefied Petroleum Gas - fuel in its liquid state when under pressure or below its 42°C (-44°F) boiling point. It turns to gas above -42°C or when not under pressure.

Propane is a liquid when it is stored in a pressurised vessel. It is a gas at 0°C (32°F) and 1 atm pressure (STP) so, when released from a pressurised cylinder the propane liquid becomes gas. Propane is stored and distributed as a liquid but typically used as a gas for heating, cooking and vehicle fuel.

The pressure and temperature at which it is stored determines whether you have propane liquid or gas.

Propane is a flammable hydrocarbon with three carbon atoms and a chemical formula of C3H8. It is a gas at 0°C and 1 atm (STP) and liquefies under pressure for storage and transport.  LPG-propane comes from natural gas processing and crude oil refining and is used as fuel for heating, cooking, vehicles, agriculture and industry. It is a liquid under pressure and a gas at standard temperature and pressure (STP).

Is LPG a Liquid or a Gas

LPG is both a liquid and a gas within the gas bottle.  LPG is gas vapour at the top of the bottle and liquid LPG at the bottom, as shown in the image. Most gas BBQ grills use BBQ gas bottles full of liquid propane. It turns back into gas when it is released for use. Portable liquid propane is available almost everywhere whilst natural gas requires a connection to a house with a gas main.

Is Propane a Liquid or Gas? Difference Between Liquid Propane & Propane Gas

Propane is a gas at standard temperature and pressure, but liquefies under pressure for storage. Propane, used as a fuel, is a co-product of crude oil and natural gas processing. Propane is classified as one of the liquefied petroleum gases - LPG gas.

You must use the type that the application was designed for.  For example, the difference between liquid propane and propane gas grill is significant. Grills are designed to use gas.  Using liquid propane instead would create a major safety hazard on a gas grill.

What is Liquid Propane

LPG - Liquid Petroleum Gas - is stored under pressure, as a liquid, in a gas bottle.

The LPG gas vapour is held in the top of the bottle and the liquid LPG at the bottom, as shown in the image above.

LPG - propane - cannot be both a liquid and a gas at the same time.

The change from liquid to gas is known as vaporisation.

First, let's sort out some of the terminology.

So, vapours are gases however not all gases are vapours.

In Australia, LPG is Propane.
Propane is the gas that is supplied to virtually all homes and most businesses that purchase LPG in Australia.

Propane is a flammable hydrocarbon gas with 3 carbon and 8 hydrogen atoms in a propane molecule and is also referred to as natural gas liquids – NGL.

LPG liquid and vapour characteristics have some similarities to water and steam.

LPG vapour is warmer and much lighter.

Liquid LPG and vapour LPG both have applications but are not interchangeable when used.

The choice depends on the purpose.

In most applications, such as home appliances, LPG is used as vapour (gas).

However, some LPG fuelled products require it to be in its liquid form, such as with autogas LPG liquid injection systems. 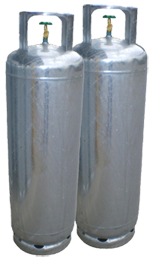 LPG is liquid in a cylinder with an area at the top of the cylinder where it turns into vapour.

However, the cylinders come in two configurations, Liquid Withdrawal and Vapour Withdrawal.

The difference depends on from where the LPG is extracted.

If drawn from the bottom of the cylinder, it comes out as liquid.

If drawn from the top of the cylinder, it exits as vapour.

The cylinders are clearly marked as either “Vapour Withdrawal” or “Liquid Withdrawal”.

In Australia, liquid withdrawal cylinders are also painted with a blue top, to make them instantly recognisable.

Using the wrong type of cylinder for an application could pose a serious safety hazard. Propane is a liquid because it is under pressure in a gas cylinder or under -42°C. Propane as a liquid looks a lot like water. Propane liquid is colourless and odourless in its natural state. LPG density or specific gravity is about half that of water, at 0.51.

The distinctive smell of LPG comes from an odorant that is added to LPG, for safety and leak detection reasons.

Caution should always be used to avoid direct exposure, as liquid LPG is cold enough to cause severe cold burns on exposed skin.

LPG as a Vapour or Gas

LPG becomes vapour at temperatures of -42°C and above.

LPG expands to 270 times the volume when it goes from liquid to gas.

The lower and upper limits of flammability are the percentages of LPG that must be present in an LPG/air mixture.

This means that between 2.15% and 9.6% of the total LPG/air mixture must be LPG in order for it to be combustible.

LPG gas vapour is heavier than air and will sink to and collect at the lowest point.

If LPG is vented to the outside air, it will quickly dissipate with the slightest movement of air.

Obviously, this would create an extremely hazardous situation.

Are Liquefied Gas and Compressed Gas the Same?

No. As already discussed, some gases, like LPG - butane and propane - is a liquid under pressure.

Still others just become compressed at high pressure but never become liquid as a result of pressurisation.

Know the Difference for Safety

As previously mentioned, most LPG applications use vapour.

If these appliances were to have liquid LPG flow to their burners, the result could possibly be a fire or similar safety hazard.

This is why you must use the right type of cylinders and LPG cylinders should always be kept upright, so that only vapour is released.

An upside-down vapour cylinder, or even one laying on its side, could release the LPG as a liquid.