Australia is ignoring the only automotive fuel in which it is self-sufficient.

Consumers are not choosing to save money on automotive fuel.

How is this possible?

Why Have We Forgotten LPG? In a most peculiar phenomenon, Australians are seemingly walking away from Autogas LPG powered vehicles while the rest of the world is clamouring to get on-board.

For example, the USA is rapidly expanding its autogas infrastructure and LPG powered vehicle population.

Europe is also moving away from diesel and toward LPG.

At the same time, Australia is briskly going in the opposite direction.

There are a number of reasons why we, as Australians, need to rethink this:

So, while other vehicles would become unusable if imports were cut off, Australia’s LPG fleet would still be on the move.

If Australia were to once again embrace Autogas LPG, the country would have an improved balance of trade.

This, in turn, would have a positive impact on the Australian dollar, making our dollar worth more in comparison to other currencies.

Consequently, Australian consumers would save on other imported products and international travel would be less expensive, in Australian dollars.

Australia is blessed with a well-established Autogas network.

There are over 3,000 autogas outlets in Australia.

Australia can easily support 2 million LPG vehicles on the road without adding any additional infrastructure.

However, unsupported infrastructure will deteriorate and vanish over time.

In the not too distant future, when petroleum imports become scarcer and even more expensive, Australia may find itself wishing that it still had the autogas network that it currently has in place. 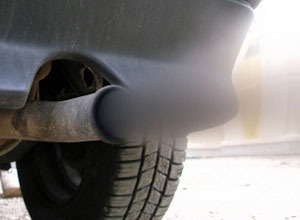 LPG is a low carbon fuel.

Autogas offers an immediate reduction of up to 15% in CO2 emissions compared to a petrol-powered vehicle.

In addition, LPG does not produce the carcinogenic particulates that are emitted in diesel exhausts.  (See image)

If Australia wants to meet its carbon reduction targets, LPG should be a key component in the mix.

As a transitional fuel, it bridges the gap between high carbon fossil fuels and the yet to be commercialised renewable alternatives.

LPG provides immediate benefits with existing technology that has already been successfully commercialised.

The renewable alternatives, like hydrogen, while very promising are still largely unavailable. The Australian government LPG rebate scheme came to an end in 2014. The government LPG Vehicle Rebate Scheme provided grants for the LPG conversion of a motor vehicle or the purchase of a new vehicle fitted with LPG.

When first introduced, this programme worked exceptionally well at encouraging consumers to convert.

However, it was subsequently reduced and it ended completely in June 2014.

With all of the advantages that Autogas provides Australia, you would think that the federal government would be encouraging Australians to adopt Autogas by removing barriers to and providing incentives for use.

You would be wrong.

Excise tax was added to LPG Autogas starting in 2011 and has increased every year since its introduction.

The net result of these actions is a steep decline in LPG conversions.

In addition, Ford and Holden, who manufactured LPG vehicles here, have ceased all Australian manufacturing and there are no LPG OEM imports.

As a result, the LPG vehicle population in Australia is shrinking, and will continue to decline, as the number of new LPG converted cars is not keeping pace with those that are being retired.

Clearly, this situation is not in Australia’s best interest.

Australians are generally very in-tune with ways to save money.

But while the savings on LPG still remains about 50 to 65 cents per litre, consumers are not taking advantage of this money saving opportunity.

This is despite the fact that it could result in hundreds, if not thousands of dollars of savings every year depending on their vehicle usage.

If you want to buy a new LPG powered car off of the showroom floor, you currently have very few options.

In fact, you only have two choices.

The current Ford and Holden LPG models are limited to full size vehicles, like the Falcon and Commodore.

These are both excellent cars.

However, consumers are no longer buying full size cars the way they once did.

Australians are driving smaller 4-cylinder cars in ever increasing numbers.

Australians would buy 4-cylinder LPG cars, if they were available for sale.

Strangely, the automobile importers have overlooked this market segment opportunity?

This deficiency is not because of a lack of available LPG models, as the European and Asian manufacturers are producing a myriad of LPG vehicles, including many small 4-cylinder models.

Australia just needs a few of these importers to take the lead and start importing smaller, more affordable LPG cars.

Australian consumers and the importers will both benefit from this initiative.