LPG Gas Bottles in the Sun – Can a Propane Tank Explode in the Sun: High Temperatures

For a propane tank to explode, it would need to be exposed to a rapid increase in heat that can overcome the pressure relief valve. A significant fire might cause a rupture but a propane tank will not explode in the sun.

Home gas bottles and service station LPG tanks are both in the sun all day.  BBQ gas bottles are no different. All are designed with the same 20% expansion space.

Many people worry about leaving their BBQ gas bottles in the sun.

What about LPG storage temperatures that are artificially high, including being left inside of cars?

Should you be worried?

Gas Bottles in the Sun 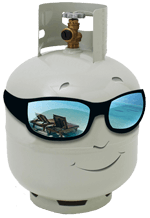 LPG gas bottles in the sun have room for expansion, with 20% ullage space for gas expansion.

Gas bottles also have pressure relief valves that will release some of the pressure by venting a small amount of gas, in the unlikely event that the vapour pressure gets too high.

9kg or 20lb BBQ gas bottles in the sun are no more prone to sun heat problems than other gas bottles and tanks.

This includes storage  inside of cars or near fires, appliances, machinery or any other heat source.

LPG BBQ bottles and larger tanks are designed to be full while allowing 20% of the space, called “ullage”, for the natural expansion of the LPG.

In other words, they are oversized. So, gas bottles in the sun are not a problem.

In combination with the ullage design feature, it makes it exceedingly unlikely that you would ever have a problem in a typical sunny outdoor environment.

Overfilling can cause problems, as it would reduce the ullage expansion space.

Overfilling is extremely unlikely with gas bottle exchange programmes, like SWAP’n’GO®, as they fill the gas bottles on digital scales.

However, it is possible to overfill a gas bottle when utilising the decanting method, as used by service stations.

The Australian Standard maximum fill levels are conservative but there can still be issues in certain situations, where LPG storage temperatures reach unacceptable extremes.

Gas bottles should not be stored near fires, appliances, machinery or any other heat source nor should they be stored indoors.

Transporting Gas Bottles Inside of Vehicles

Temperatures can reach high levels within the interior of cars or where the cylinder is subject to artificial or reflected heat sources.

Gas bottles should only be in vehicles whilst being transported.

They should be removed as soon as they reach their destination and always transported upright and secured.

If a gas bottle is exposed to abnormally high temperatures, the gas will expand.

If it exceeds the maximum safe pressure, the pressure relief valve, built into the main valve, will release some of the pressure by venting some gas.

It should be noted that just having gas bottles in the sun would NOT ordinarily create a gas pressure problem.

If the gas bottle is stored safely outdoors and away from any ignition source, even if the gas is released it should just harmlessly dissipate.

Normal Exposure for Gas Bottles in the Sun

Consider 45kg home gas bottles in the sun for hours a day without any problems.

Service stations have massive LPG autogas tanks that are also exposed to the sun for virtually the entire day, yet still no problems.

BBQ size gas bottles in the sun are no more prone to sun heat problems than other gas bottles and tanks.

The nominal maximum fill levels specified in the Australian Standards are calculated for normal storage and use anywhere in Australia, regardless of climate.The maximum fill level is a complex calculation which takes into account the size of the container, the maximum pressure and the expansion ratio of the gas.You can refer to AS2030.5-2009 and AS1596-2008 for more information regarding fill levels.

Now, the exact OPPOSITE problem…

Why Does Ice Form on Gas Bottles & Regulators?

Under the right circumstances, condensation or ice can form on gas bottles and/or gas regulators.

But why does this happen? Why the Gas Bottle Gets So Cold

To make sense, it helps to first explain how LPG works. LPG is stored under pressure, as a liquid, in a gas bottle.It turns back into a gas by ‘boiling’ into gas vapour. This happens at the very low temperature of -42°C.To boil, the liquid LPG draws heat from the steel walls of the gas bottle.  This, in turn, makes the gas bottle feel colder than the ambient temperature.

But before making its way to the LPG appliances in your home, it passes through your gas regulator, where the pressure is reduced to the appropriate level.The regulator delivers a constant safe pressure while the gas bottle pressure can significantly vary, depending on the ambient temperature and the amount of liquid gas remaining in the bottle.As the LPG passes through the regulator, it expands, resulting in very cold gas vapour temperatures.This causes the regulator to also reach extremely cold temperatures, as the cold gas vapour passes through it.Depending on the humidity of the surrounding air and the rate at which the gas is being used, condensation or even ice will form on the regulator.The faster the gas is used, the colder the regulator will get.This is why, under normal operation in warm and humid climates, the outside of a gas regulator will feel cold to the touch and may also be wet, frozen or frosted.

It is important to regularly leak test your BBQ gas bottle, regulator and hose.Leaks from these items are frequently the cause of BBQ gas fires.

How to Test for Gas Leaks

Hot To Safely Attach or Change Your BBQ Gas Bottle

Changing gas bottles is not difficult but you do need to know how and you should always test for leaks, when done.

The male connector of a POL regulator has a reverse or left-handed thread. So, to detach, you turn it clockwise and then anti-clockwise to re-attach. Remember to do a leak test when done.For full step-by-step instructions, please see:

How to Attach or Change Your BBQ Gas Bottle