In its natural state, LPG is a colourless and odourless gas. Odourant is added for safety. 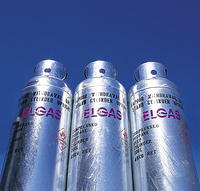 LPG composition is primarily propane, butane, isobutane, butylenes, propylene and mixtures of these gases, which are the components of LPG and all with different LPG properties. LPG is composed of liquid or gas (vapour), depending on pressure and LPG gas temperature.

Natural Gas Liquids – NGL – have the same LPG composition and gas temperatures plus a few more gases not normally included in LPG.

Liquefied Petroleum Gas – LPG – constituents are primarily propane, butane, isobutane, butylene, propylene and mixtures of these gases. LPG gas constituents are produced from crude oil reefing and natural gas processing. They are liquid under pressure and gas at room temperature and pressure.

The properties of LPG (properties of propane and butane) include: LPG is liquid under pressure but becomes gaseous in ambient conditions. LPG vapour is about 1.55 (propane) to 2.08 (butane) times heavier than air. LPG boiling point is between -42°C to -0.4°C, depending on the propane to butane constituent ratio in the LPG gas mixture.

All of the above are the properties of LPG.

Note: Some numbers have been subject to rounding.

LPG is comprised primarily of propane and butane, whilst natural gas is mostly methane. LPG is generally a mixture of predominantly propane (C3H8) and/or butane (C4H10), with smaller amounts of other NGL hydrocarbons including ethane, isobutane and pentanes. LPG physical structure is as both a liquid, when under pressure, and as a gas.

LPG structure (propane structure) is as a three carbon molecule with the chemical formula of LPG gas - propane as C3H8. That's 3 carbon atoms and 8 hydrogen atoms making one molecule of propane.

LPG structure (butane structure) is a four carbon molecule with the formula C4H10, with 4 carbon atoms and 10 hydrogen atoms making one molecule of butane.

As a liquid, LPG looks a lot like water. It is colourless and odourless in its natural state.

Butane boiling point is -0.4°C at 1 atm pressure. Above -0.4°C, at 1 atm, it becomes gas vapour. Butane stays liquid because it is under pressure in a gas cylinder.

As a liquid, it looks a lot like water. It is colourless and odourless in its natural state. 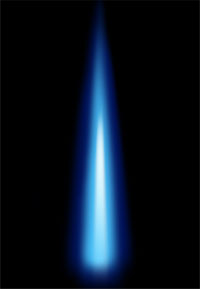 So, liquid propane temperature for freezing is a much lower temperature than water, which freezes at 0ºC.

LPG is composed of liquid or gas (vapour), depending on pressure and LPG gas temperature. The LPG boiling point is the liquid propane temperature at boiling and becomes vapour (gas).

For Propane vapour at 20°C must be pressurised to about 836 kPa to see it liquefy, and at 50°C, about 1713 kPa pressure is required. The lower the temperature, the easier it is to liquefy the vapour.

For mixtures of Propane and Butane, the liquefaction conditions also depend on the composition of the mix, as well as the temperature and pressure of the vapours.

Commercial & Domestic LPG Composition: Which Gas is Present in LPG?

In different countries, the commercial and domestic LPG composition can be propane, butane or propane-butane blends.

Relative density of LPG gas is 1.882kg/m3 at 0°C & 1ATM (0 psig), which is STP (Standard Temperature & Pressure), the difference being a lower temperature.

LPG (propane) expands at 1.5% per 5.55°C temperature increase. In other words, the density changes.

So, if the gas bottle was filled by volume on a hot day, it would have less gas, in kg, than a gas bottle filled on a cold day.

That's why it is frequently measured and sold in kg.

Most auto LPG bowsers and tanker delivery trucks have an automatic correction factor so it can be delivered and/or sold in litres.

Unlike water, 1 kilogram of LPG (propane) does NOT equal 1 litre of LPG. Relative density of LPG liquid or specific gravity of liquid propane is about half that of water.

The relative density of LPG liquid is 1 gallon of liquid propane weighs 4.24 pounds.

The relative density of LPG gas - butane gas is 2.48 kg/m3 (at boiling point)

So, relative density of LPG gas is heavier than air.

Note that LPG gas is also referred to as LPG vapour, which is the more technically correct term.

2. LPG is a group of flammable hydrocarbon gases liquefied through pressurisation.

They are, in most cases, used as fuel.

4. There are a number of gases that fall under the “LPG” label.

These include propane, butane and isobutane (i-butane), as well as mixtures of these gases.

5. LPG gases are compressible into liquid at low pressures.

6. The common uses for LPG include use for fuel in heating, cooking, hot water and vehicles.

It is also utilised for refrigerants, aerosol propellants and petrochemical feedstock.

8. "Wet gas" is a term that is sometimes used to describe LPG, as a result of its liquidity.

9. An alternate reference for LPG (propane) is as a Natural Gas Liquid – NGL.

10. In nature, propane does not occur alone.

In Australia, LPG is propane.
It is also called LPG Gas, LP Gas, Propane, BBQ Gas, Camping Gas or Autogas.
LPG can be other gases in other countries.

The pressure at which LPG transitions between liquid and vapour is called its vapour pressure. The pressure rises with LPG temperature. It generates 0 kPa at -43°C but at 38°C (100°F) it generates 1186kPa or 172 PSIG.

As mentioned before, LPG is stored in a gas bottle under pressure. LPG gas pressure varies with temperature. The term “pressure” refers to the average force per unit of area that the gas exerts on the inside walls of the gas bottle. “Bar” is yet another unit of measure for LPG gas pressure.

LPG gas pressure can vary based on temperature, as shown in the chart.

The level of fill in the gas bottle comes into play when the LPG is in use, as it affects the rate of vapourisation.

LPG is a liquefied gas. So, the LPG gas pressure inside the cylinder (LPG gas bottle pressure) will remain the same from full until the vaporistion of the last of the liquid LPG.

Then the LPG gas bottle pressure will fall, with the use of the last of the LPG vapour.

In its natural state, LPG is an odourless gas.
The distinctive smell in propane that people associate with LPG is actually added to it as a safety measure.
Without the addition of a smell in propane, leaking gas could collect without detection.

Always use caution should to avoid direct exposure, as liquid LPG is cold enough to cause severe cold burns on exposed skin.

The LPG energy content or calorific value of the gas used to heat water is no different than LPG used for other applications.

In the presence of enough oxygen, the combustion of propane forms water vapour and carbon dioxide, as well as heat.

Equation for incomplete combustion of propane results in the production of water, carbon monoxide, carbon dioxide and heat:

Equation for Incomplete Combustion of Propane

LPG gas temperature at which a flame burns is 1980°C.

When it is burning properly, the flame is blue.
A yellow or red flame is usually indicative of incomplete combustion.

The lower and upper limits of flammability are the percentages of LPG that must be present in an LPG/air mixture. This means that between 2.15% and 9.6% of the total LPG/air mixture must be LPG in order for it to be combustible.

Below this temperature, it will stop burning on its own.
However, if a source of continuous ignition is present, it will burn below  -104°C.

Propane auto ignition temperature is when propane or butane ignites without an external source of ignition, like a spark or flame.

The propane auto ignition temperature decreases as the pressure or oxygen concentration increases.

LPG gas is heavier than air and will sink to and collect at the lowest point.  If vented to the outside air, LPG will dissipate with the slightest movement of air.

With LPG vented into a sealed structure, with no air movement, the LPG gas will collect on the floor. It will rise toward the ceiling, as more LPG enters into the structure.

LPG Vapour (Gas) Use vs. Liquid Use

LPG (propane) supply is either liquid or vapour.
The difference is in the extraction from supply cylinder or vessel.
Most LPG applications use vapour.
Appliances such as water heaters, room heaters and cookers all use vapour.
If these appliances were to have liquid LPG flow to their burners, the result could be a fire or similar safety hazard.
This is why LPG cylinders should always be upright, so that any gas released is in vapour form only.

6 Things You Didn’t Know About LPG

While you may know some of these facts, chances are you don’t know all of them.

Have a read and learn more about:

5. LPG is a Renewable Energy Source Hollywood and the media would have you believe that LPG cylinder explosions are a common event.

In fact, explosions are quite rare and it is quite difficult to even make an LPG cylinder explode on purpose.

You’ll enjoy watching this Myth Busters Video where they try to make a cylinder explode.

Most gas explosions are the result of gas leaking into a confined space, like a kitchen.

This is no more likely with LPG than with piped natural gas.

Often, the gas bottle itself is not even involved in the event, as gas bottles are always stored outdoors.

Most people have never even heard of Simulated Natural Gas (SNG) let alone know that it can be made with LPG.

We can SNG use in place of natural gas, as it has near identical combustion characteristics.

It can be used alone or mixed with regular natural gas.

There are no changes required in burners, regulators or gas jets.

There are a number of reasons to use SNG:

Many people mistakenly think of LPG as a by-product.

In reality, LPG is a valuable co-product produced from gas fields and crude oil refining.

They process the gas stream from natural gas fields to separate the gases present.

These include methane, ethane, propane, butanes and pentanes.

Impurities are also removed, including water.

The produced gases are each funnelled into their own supply streams.

They capture propane and butane, the two common types of LPG, and store them in their liquefied form.

The same is true of crude oil refining.

The refinery process creates many co-products.

4. LPG is Australian Made Energy

LPG is the only motor fuel in which Australia is self-reliant.

Unlike both petrol and diesel, for which Australia relies on imports, we produce more LPG than we consume.

Not only is Australia completely self-sufficient in LPG but it is also a net exporter of LPG.

That satisfied the local demand of 1.5 million tonnes, with net exports of 815,000 tonnes. LPG has gone from being a traditional fossil fuel to a new form of renewable energy.

Scientists have created a genetically engineered version of the common E. coli bacteria.

So, LPG is now a renewable energy.

With genetic modification, and the help of a couple of enzymes, they make propane.

There is some confusion over what Coal Seam Gas (CSG) is and what it is not.

LPG is not CSG.

While CSG may contain various gases, typical CSG is 95% to 97% pure Methane.

LPG is not Methane.