Elgas to the Rescue with Helicopter LPG Delivery!

In early February of 2013, the little town of Coopers Creek NSW was cut off from the rest of the world by a landslide across the only access road. After about 2 weeks of isolation, the 100-140 residents of the area were getting quite desperate for all of the essentials.

The SES helicopter was delivering food but the residents also needed LPG for their homes.

What could be done?

The Plan Was Hatched

As chance would have it, Bruce was also a founding member of the SES Rescue Team in Lismore in the 1980's.

So, he contacted the SES and asked if they would be willing to deliver LPG by helicopter if Elgas worked out the details, including all of the safety issues.

As safety was the highest priority, Bruce went straight to our National Safety Manager, Steve Reynolds, who prepared a full Job Safety Analysis.

Only after it was all completed was the mission judged as safe to proceed. 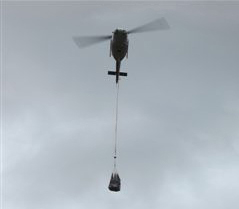 The SES Huey helicopter was utilised to airlift ten 45kg cylinders into the community.

A second Bell Jet Ranger helicopter was used to transport Bruce and Chris Gooley, another member of our Ballina-Lismore team, as they were needed to supervise the airlift safety procedures and the installation of the cylinders.

At 10.30am, on 18 February, Bruce and Chis took a cylinder truck with stock on-board to Repentance Creek Hall, the helicopter loading site.

The site was chosen as it was as close as they could safely get helicopters to the drop zone.

However, the flight time was still about 15-20 minutes each way. Using advice from and in close consultation with Steve Reynolds,

they stacked and strapped the load together, as one bundle, into a cargo net.

The load was carefully flown and then lowered very gently to the ground. The cylinders were stood upright and checked promptly after the landing.

Bruce and Chris flew from the loading point to a paddock and then, after a walk and a 4WD ride, they arrived at Coopers Creek School, which had been closed due to the landslide.

Here they met with local residents who were grateful to see them, including several people waiting for gas.

Chris provided cylinder handling and connection training to four of the townspeople who would oversee all of the connections.

Once trained on the school’s cylinders, they were supplied with Personal Protective Equipment (PPE), MSDS documentation and all of the appropriate signage, with which they erected an emergency depot. After the delivery, when everything was determined to be safe and secure, Bruce and Chris flew back in the Jet Ranger to Repentance Creek.

Later, much to their surprise, they found themselves on the 6 o’clock news!

The SES and pilots were very professional, thorough and extremely safe to work with on this project.

Without them, and their know-how, none of this would ever have been possible.

They are the true heroes of this story.


View More LPG Gas Blogs
Comments, questions or feedback?
Please Email us at:   This email address is being protected from spambots. You need JavaScript enabled to view it.