A boiling liquid expanding vapor explosion (BLEVE - blĕ-vē) is an explosion caused by the breach of a vessel holding a liquid under pressure that has attained temperatures above its boiling point. A BLEVE happens because the pressure exceeds the design pressure of the vessel. This results in a catastrophic failure and explosion. A BLEVE blast does not necessarily involve fire, a prime example of this being a steam boiler explosion.

The BLEVE gas can be anything from having propane tanks explode (LPG gas cylinders explode), to welding gas, to the steam in a steam boiler. A boiling liquid expanding vapor explosion – BLEVE (blĕ-vē)- is an explosion initiated by the breach of a vessel containing a pressurised liquid that has reached a temperature above its boiling point.

A BLEVE is a gas explosion. The gas can be anything from LPG-propane, to acetylene welding gas, to steam in a steam boiler. The common element of a BLEVE is typically a steel vessel that ruptures when the contents boil and pressure builds beyond the containment limits of the vessel.

A BLEVE is very different from an LPG gas leak explosion, where leaking gas accumulates in an enclosed space, combined with an ignition source.

Propane tanks can explode (LPG gas cylinders can explode) and it is sometimes referred to as a BLEVE. BLEVE is the acronym abbreviation for Boiling Liquid Expanding Vapour Explosion.

If a pressurised gas bottle or vessel ruptures when the contents are above their boiling point, it is referred to as a BLEVE.

A large BLEVE (Propane-LPG tank explosion) is typically at a commercial or industrial site, where there are large storage vessels.

A BLEVE (Propane-LPG tank explosion) is caused by a pressure build-up that exceeds the strength of the steel vessel walls and causes it to rupture with bomb-like force. The escaping gas rapidly expands, with explosive force, from the rupture and may or may not involve fire.

For example, if the BLEVE was caused by steam, the steam would not catch fire, even though it exploded violently.

On the other hand, a hydrocarbon fuel, like Propane-LPG tank explosion, would rapidly expand and would typically encounter an igntion source, causing an incendiary fire ball.

No pressure build up means no risk of a BLEVE or Propane-LPG tank explosion.

Steam boilers also have pressure relief valves for exactly the same reason. The only difference is that it is independent of any other valve,

Gas bottles have been around for about 100 years.

Over that time, the gas industry has had a lot of time to perfect the safety features of gas bottles and valves.

In yet another episode of MythBusters, they tried to see if a BBQ gas bottle would turn into an exploding rocket when placed in a fire.

They placed the bottle in the middle of a raging fire, burned down the demonstration building.

After it was over, the gas bottle was still sitting there, looking almost brand new - no Propane-LPG tank explosion.

It only proved that the Pressure Relief Valve worked perfectly.

In addition to pressure relief valves, there are a number of other ways to help prevent BLEVEs (Propane-LPG tank explosion).  The burying of LPG-propane tanks and deluge cooling systems are two of the most common and they both focus on keeping the containment vessel protected from external heat sources.

Burying an LPG-propane tank underground to prevent a BLEVE (Propane-LPG tank explosion) protects the tank from external heat sources, like fires in adjacent buildings.  If you have multiple tanks, it also helps prevent any type of chain reaction.

Deluge systems are water systems, similar to fire sprinkler systems, but on a much larger scale and with a high volume of water. Deluge systems prevent BLEVEs by keeping the vessel cool and preventing any fire in the areas nearby. 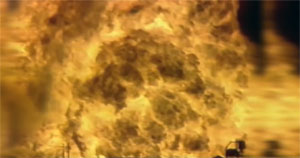 An LPG explosion is almost always caused by the accumulation of a gas leak in an enclosed space combined with an ignition source, not an Propane-LPG tank explosion. The leak can be from the gas appliance or other source not involving the bottle. In many cases, when an LPG gas leak explosion occurs, the gas bottles are not even involved.

The gas cylinders almost never explode because of the built in Pressure Relief Valve.

The gas involved in a gas leak explosion may also be welding gas or other non-LPG gas.

There must be an ignition source for an LPG explosion to occur. Use with caution. The above table gives a summary of tank properties, critical times, critical distances and cooling water flow rates for various tank sizes. This table is provided to give responders some guidance but it should be used with caution.

Tank dimensions are approximate and can vary depending on the tank design and application.

Minimum time to failure is based on severe torch fire impingement on the vapor space of a tank in good condition, and is approximate. Tanks may fail earlier if they are damaged or corroded. Tanks may fail minutes or hours later than these minimum times depending on the conditions. It has been assumed here that the tanks are not equipped with thermal barriers or water spray cooling.

Tanks equipped with thermal barriers or water spray cooling significantly increase the times to failure and the times to empty. A thermal barrier can reduce the heat input to a tank by a factor of ten or more. This means it could take ten times as long to empty the tank through the Pressure Relief Valve (PRV).

Fireball radius and emergency response distance is based on mathematical equations and is approximate. They assume spherical fireballs and this is not always the case.

Two safety distances for public evacuation. The minimum distance is based on tanks that are launched with a small elevation angle (i.e., a few degrees above horizontal). This is most common for horizontal cylinders. The preferred evacuation distance has more margin of safety since it assumes the tanks are launched at a 45 degree angle to the horizontal. This might be more appropriate if a vertical cylinder is involved.

It is understood that these distances are very large and may not be practical in a highly populated area. However, it should be understood that the risks increase rapidly the closer you are to a BLEVE. Keep in mind that the furthest reaching projectiles tend to come off in the zones 45 degrees on each side of the tank ends.

Tradespeople Incidents with Other Gases

Acetylene gas used in oxy acetylene welding, which is very volatile, is frequently the culprit. Pictured above is the result of an acetylene explosion in a tradie's van.

However, the media just reports “gas bottle explosion” without specifying the gas.

The result is that many people falsely assume it was a Propane-LPG tank explosion. While unquestionably spectacular, fortunately BLEVEs and LPG explosions are quite rare.

Storage vessels are designed with a number of safety devices including pressure relief valves, deluge systems that shower water on the vessel to keep it cool and burying the vessels underground.

So, the danger of being affected by a BLEVE (Propane-LPG tank explosion) are way less than being struck by lightning.