LPG Vaporisation - How Does LPG - Propane Turn from Liquid to Gas?

Did you know that every time you turn on one of your gas appliances, the LPG in your gas bottles starts to boil?

If you could see though the steel, you would also notice that it looks just like water boiling.The big difference is that it happens at -42°C or -44°F.

It is typically used as a gas (vapour) but there are liquid applications, as well. The pressure and temperature at which it is stored determines which kind you have. At 1 ATM, propane vaporises at-42°C.

LPG (propane and/or butane) turns from liquid to gas when the LPG gas temperature reaching the boiling point. However, propane and butane boil at different gas temperatures and are also referred to as natural gas liquids – NGL.

Propane boils at a lower gas temperature than butane, making it more suitable for cold climates.

On a cold winter day, outdoor butane cylinders may not reach their boiling temperature, leaving the user with no gas.

Liquid LPG boils (liquid propane turns to gas) and turns back into gas vapour when you release some of the pressure in the gas bottle, by turning on your gas appliance.

The vapour pressure in the bottle also increases with temperature, as explained below.

How LPG-Propane Boils - How Does Liquid Propane Turn to Gas

Liquid propane turns to gas by boiling and turning from a liquid to gas vapour, a process called vaporisation. To boil, the liquid LPG draws heat from the steel walls of the gas bottle which, in turn, get heat from the ambient air. 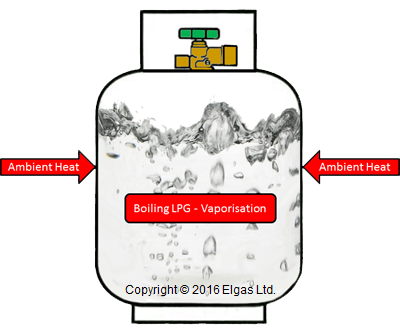 As the steel of the bottle draws heat from the ambient air heat, cold weather will slow down the rate of vaporisation.

The gas bottle gets even colder when you are actually in the process of using the gas.

LPG stays liquid because it is under pressure in a gas cylinder.

LPG density or specific gravity is about half that of water, at 0.51.

The amount of gas that the appliance or appliances are drawing from the gas bottles must be matched by the rate of vaporisation.

If a gas bottle ices up regularly, it simply means that the vessel is too small for the vaporisation load placed on it.

This is known as the “wetted area”.

Vaporisation tables (as shown below) are used to match the required vaporisation rates to the corresponding vessel size.

In instances where a larger vessel is not an option, the only alternative is to supply some artificial means of increasing vaporisation.

An LPG vaporizer works by adding more heat to the liquid LPG, for a higher vaporisation rate. An LPG vaporizer (vaporiser) works can be nothing more than a serpentine coil of LPG filled tubing, absorbing heat from ambient air or a heated water bath of about 60°C.

A heaterless LPG vaporizer works in much the same way except that the water is at ambient temperature. The liquid LPG is allowed to expand and cool rapidly and then the LPG extracts heat from the ambient temperature water tank. Cooling tower water can also be used for further energy savings.

An LPG (propane) vaporizer is used when the steel walls of the vessel cannot provide sufficent heat to the liquid LPG to meet the required gas vaporisation load.

Keeping in mind the concept of "wetted area", the maximum rate of vaporisation drops as the fill level drops.

If there is less LPG in the vessel, there is less contact area between the liquid LPG and the steel that provides the heat for vaporisation.

1. As a simple rule of thumb, when using vessels of say 2.75 or 5.1kL capacities, simply extrapolate between the two nearest size vessels but biasing your calculations on the conservative side. Always consult your supplier’s technical representative for advice.

2. Always check with your supplier’s technical representative that the above vapourisation rates are correct for the particular vessel you have designated.

3. For sites requiring a high vapourisation rate but it is not cost effective to install larger and/or multiple vessels, consider using a vapouriser.

4. Vessels above 3 tonnes or over 7.5kL will be custom designed by supplier to suit customer needs. Figures provided are only rough estimates, based on previous designs.

Liquefaction: The Conversion of LPG Vapour to LPG Liquid

For propane vapour at 20°C it must be pressurised to about 836 kPa to see it liquefy.  At 50°C, about 1713 kPa pressure is required. The lower the temperature, the easier it is to liquefy the vapour.

For mixtures of propane and butane, the liquefaction conditions also depend on the composition of the mix, as well as the temperature and pressure of the vapours. Initially, condensation forms when the temperature of the gas bottle or regulator drops below the dew point.

This is exactly the same as the condensation you get on a humid day with a glass of ice water.

Under the right conditions, when you are using gas very rapidly, ice can even form on the gas bottle!

So, vapours are gases however not all gases are vapours

The LPG gas vapour is held in the top of the bottle and the liquid LPG at the bottom, as shown in the accompanying image.

As previously mentioned, when LPG is stored in a gas bottle, it is under pressure.

The term “pressure” refers to the average force per unit of area that the gas exerts on the inside walls of the gas bottle. As LPG is a liquefied gas, the pressure inside the cylinder will remain the same from full until the last of the liquid LPG is vaporised.

Then the pressure will fall quickly as the last of the LPG vapour is used, as well.

It is particularly important for larger commercial installations where the rates of gas consumption are higher.

The technical staff matches the gas load to the appropriate vessel size and, if required, a vapouriser.