People do some amazing things.

For example, 3 American farmers, in the state of Kentucky, decided to build their own submarine using recycled LPG storage tanks.

Best of all, it actually worked. Christened the Kraken, after the mythical sea monster, they ‘sailed’ it down to 10 meters underwater and lived to tell about it!

Read all about how they did it and watch the video….

How Did They Do It?

The main structure of their submarine consists of two large recycled LPG storage tanks, one smaller than the other.

The larger tank is the main body of the submarine.

A slice of the smaller tank is welded on to the main tank to create a superstructure, allowing headroom for the occupants.

The main tank is welded to a pair of large steel I-beams.

These I-beams act as the framework for the submarine and the attachment point for other components. As with most submarines, the Kraken is battery powered.

They use the batteries to power a hydraulic pump.

The hydraulic system is used to drive the main propeller and to control the rudder and diving planes.

The picture shows the black propeller, just below the rudder.

In the picture to the right, you can see the black hydraulic cylinder used to control the big blue rudder. It is at the top, above the rudder.

Keeping the Shiny Side Up

A submarine requires a rather heavy keel to achieve neutral buoyancy, enabling it to go under water.

Without it, the LPG tank structure would just bob like a cork, because of all of the air trapped inside.

The low tech solution employed by our farmer builders was to fabricate a steel tray and fill it with concrete.

This tray was welded between the two I-beams at the bottom of the craft.

The keel is also critical to keep the submarine upright.

Without it, the sub would be unstable and just roll over to any angle.

The Up & Down - Ballast Tanks

In order to submerge, this submarine has big blue ballast tanks that can be flooded with water.

Adding water gives the sub negative buoyancy, allowing it to ‘sink’ in a controllable way.

With the air replacing the water, the sub is once again buoyant and rises to the surface.

To cruise underwater, without sinking to the bottom, the crew adjusts the amount of water in the ballast tanks.

With the right amount, the sub achieves neutral buoyancy and can remain at a given level. 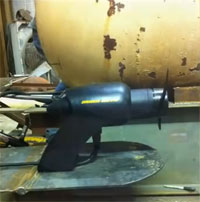 In order to control the up and down pitch of the sub, a pair of diving planes are fitted to the front of the boat.

They help control the depth of the sub and aid in diving and surfacing of the vessel.

Whilst most diving planes just rely on the flow of the water to change the attitude of the sub, these builders opted to add small propeller drives to their diving planes.

This was necessary because this sub is only designed to be a slow speed craft and regular diving planes would not have been effective at these slow speeds. 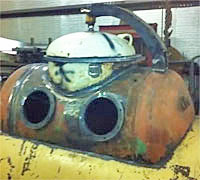 In order to be able to get in and out of the boat, and to be able to see where they were going, the submarine needed a hatch and windows.

The hatch opens outward both to save room inside and to allow for the water pressure to help hold it closed.

The sub has six windows.

The two forward facing windows allow the crew to see where they are going.

One is head high, in the superstructure, and the other is in the nose of the sub.

There are also four windows on the sides of the superstructure.

These are positioned so that the 2 person crew can both look to either side.

Once the structure was complete, primer was used and the final paint finish applied.

The builders resisted the temptation to paint it yellow (with apologies to the Beatles).

The boat then had to be mounted on a trailer for transport and launching. All images courtesy of the Science Channel

Please Email us at:   This email address is being protected from spambots. You need JavaScript enabled to view it.